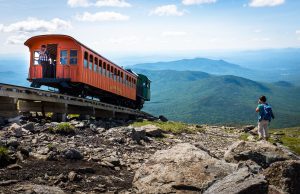 Located on the western side of the famed mountain, the Mount Washington Cog Railway departs from the Marshfield Base Station near the Omni Mount Washington Resort. The railway runs year-round delivering visitors to the 6,288-foot summit (or near treeline during the winter months) for a three-hour round-trip tour. 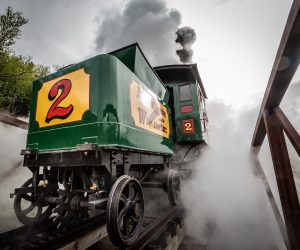 Celebrating 152 years, the Cog Railway was opened to passengers in 1869. However, the beginning of the railway dates back to 1857. Sylvester Marsh, a native of New Hampshire, left his successful career in the meatpacking and grain drying industries in Chicago to move to Boston. Marsh, who struggled with indigestion and other ailments, sought the fresh air of the White Mountains like many wealthy people of the Industrial Age.

The idea of the Mount Washington Cog Railway was born from a mishap. Marsh and a friend set off to hike Mount Washington. Known for some of the worst weather in the world, the weather quickly turned from a beautiful summer day to a life-threatening storm above the treeline. The story goes that Marsh and his friend barely survived by crawling on hands and knees to the Tip Top House.

While spending the night on New Hampshire’s tallest peak, Marsh vowed to build a safer way for visitors to reach the summit. Due to Mount Washington being on state land, Marsh needed to go in front of the New Hampshire State Legislature for a charter. He went in front of the Legislature in 1858 where he was laughed at and jokingly awarded a charter with the promise that once he reached the summit of Mountain Washington, he would continue building a “railway to the moon.”

Building a railroad on the side of a steep mountain is almost impossible. The average grade of Mount Washington is 25 percent with some spots at almost 38 percent. To overcome the steep grade of the terrain, Marsh designed a railway that was built entirely on an elevated trestle system. This meant the tracks would be above ground level. To this day, the Cog is the only railway whose mainline is built entirely above ground level and the second steepest railway in the world (the steepest is the Pilatus Railway in Switzerland).

Again, due to the steep terrain, a traditional railroad was out of the question. Instead, Marsh applied the cog gear and rack technology to create the first mountain-climbing railway. Cog and rack technology is very similar to the sprocket and chain on a bicycle, but it had never been applied to mountain-climbing locomotives and railways before Marsh. Cog gears are located under the locomotive engine, which engages the rack (a spooled center track fixed to the train tracks and looks like the chain on a bicycle). As the cog turns, the locomotive can pull itself forward on the rack and up the mountainside.

Construction of the Cog was delayed by the Civil War that broke out in 1861. A fun fact about Marsh – before he moved back east from Chicago, he got himself into a little land dispute. He hired Abraham Lincoln as his lawyer, which was the last case Lincoln took before becoming the President of the United States.

After the Civil War ended, the first Cog Railway was built relatively fast. The first locomotive called “Hero” was built and delivered from Boston. Due to the locomotive’s unique design, it quickly became known as “Old Peppersass” because its vertical boiler resembled a pepper sauce bottle. The first 600 feet of track was built quickly over the Ammonoosuc River and was used as a presentation to government officials and investors in August 1866.

Before Marsh could begin building the actual railway he had to clear-cut dense forest and turn that timber into lumber to build the trestles and log cabin office. After his investor presentation, Marsh hired over 300 men to continue building the railway to the summit. By summer 1868, the crew reached the halfway point where the mountain transitions from its forests to above treeline sub-arctic tundra. To overcome the harsh and boulder-strewn area, Marsh built the famous “Jacob’s Ladder” that you can experience yourself on a trip on the Cog.

The first official ride of the Mount Washington Cog Railway occurred on August 14, 1868, and the railway has run regularly ever since except for World War I and World War II. Trackwork was completed by the next Spring, and Peppersass reached the summit of Mount Washington with passengers on July 3, 1869 – a feat that not many people thought Marsh could do!

Today, Wayne Presby is president of the Mount Washington Railway Company, after purchasing it from Ellen Teague in 1983. Over the years, Presby has made significant investments in modernizing its equipment, infrastructure and operations. Under his leadership, the Cog added a new passing track and hydraulic switches, enabling as many as seven trains to run at a time. Recently, a massive re-railing project resulted in heavyweight, 100lb rail replacing lightweight rail first installed in the late nineteenth century. Re-railing the entire 3 mile route with heavyweight rail ensures a smoother, quieter ride, a stronger track system, and less routine maintenance. Opening in 2021, a new 35,000 square foot maintenance facility once again brings year-round repair, fabrication and storage of the locomotives, coaches and other rolling stock back to the Marshfield campus. Previously, equipment was trucked up to a temporary facility in Berlin for winter maintenance. Mr. Presby’s stewardship of the railway has guaranteed that many generations of visitors will continue to enjoy this remarkable operation far into the future.

The Cog was a steam railway exclusively from its inception until 2008, when the first custom designed and built biodiesel locomotive rolled out of the engine shop. Today, motive power is provided primarily by 7 of these powerful machines, and, in the warm weather, two vintage steamers. MW2, built in 1875, and MW9, built in 1908, were both fabricated at the Manchester (NH) Locomotive Works. Steam trips at the railway are very popular, and often sell out months in advance. 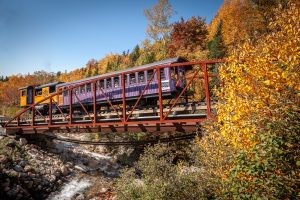 To truly understand the long history and engineering feat of the Mount Washington Cog Railway, you need to book a ride on the railway. A roundtrip ride on the Cog is about three hours. The ride up and down the mountain takes approximately one hour each leaving you an hour to explore the summit of Mount Washington. In clear weather, the Mount Washington State Park at the summit provides 360-degree views of the Presidential Mountain Range from the Observation deck of the Sherman Adams Building. The adjacent Tip Top House Museum, where Marsh first developed his seemingly crazy idea for a railway on Mount Washington, provides a glimpse into 19th century life at the top of New England. Like Marsh, visitors may also experience a small dose of some of the world’s worst weather!

Trains run 7 days a week, year round, with destinations at lower elevations once the summit closes for the winter in late October. With limited seats on the train, it’s important to book your tickets in advance especially during the summer and fall months. You don’t want to miss your opportunity to experience one of the world’s great rail adventures, and New Hampshire’s Premier Attraction since 1869! For schedule, tickets and much more, please visit thecog.com. 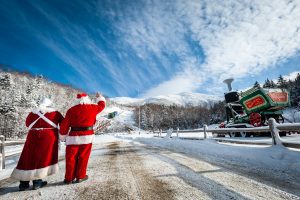