Franconia Notch is one of the most beautiful places in New Hampshire and attracts people from all over the globe every year. To truly understand the unique landscape and its people, you have to step back in time millions of years ago to the Ice Age.  The Ice Age Franconia […] 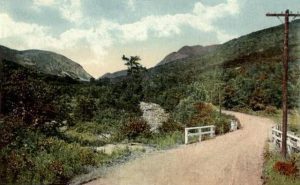 Franconia Notch is one of the most beautiful places in New Hampshire and attracts people from all over the globe every year. To truly understand the unique landscape and its people, you have to step back in time millions of years ago to the Ice Age.

Franconia Notch began to form millions of years ago during the Ice Age. The cold temperatures brought very little melting every year leading to the formation of the Laurentide Ice Sheet expanding from Canada into modern day New England. About 12,000 years ago, the ice sheets were over a mile high in most places across the White Mountains. As the ice began to melt and water flowed, Franconia Notch began to form.

As the Laurentide Ice Sheet moved south through New Hampshire, it would shear off pieces of the granite peaks of the White Mountains ultimately creating the deep valley known as a notch in New England. In many places in Franconia Notch State Park, you can visibly see the scrape marks left behind by the ice sheet on exposed bed rocks or the numerous boulders left behind by the glacier.

The popular Flume Gorge was also formed by glacial activity during the Ice Age. The Gorge is comprised of Conway granite that was cooled and cracked in parallel lines as the Laurentide Ice Sheet moved. Basalt, a hard, black volcanic rock, forced up from the earth and began crystallizing into rock dikes. As the ice began to melt about 10,000 years ago, rivers began to form, which eroded the basalt creating the Flume Gorge. Mother Nature truly is incredible! 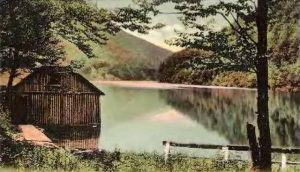 Similar to the Lincoln/Woodstock Area, the White Mountains was home to the Abenaki tribes for thousands of years before the European settlers even set foot in the “New World.” The town of Franconia was first granted by Colonial Governor Benning Wentworth in 1764. It was named Franconia after the Franconian Switzerland region of Germany at the time due to its mountainous landscape.

Franconia started with controversy over its land charter. Governor John Wentworth, Benning’s nephew, regranted the land charter in 1772 as there were claims that the first land grant was not completed in the required time allotment. Franconia developed similar to other towns in the western White Mountains.

During the 19th century, it became a tourist destination of the wealthy families in Boston, New York, and beyond. Richard Taft and Charles H. Greenleaf purchased the Flume House in 1848 and Lafayette House in 1853, two of the first luxury vacation resorts in the area. In 1853, the White Mountain Railroad finally reached Littleton and connected to other major railroads in Boston, Concord, Montreal, and other major cities on the eastern seaboard.

Tourism dipped during the Civil War but began booming again in 1870s and the area saw huge growth in tourism, resorts, and other attractions. The Profile House greatly expanded in 1906 to accommodate the newer wealthy middle class. Tourism to the mountain via rail was popular up until the coming of age of affordable automobiles. The historic Profile House was destroyed by a massive fire in 1923 and never rebuilt, but it laid the foundation for Franconia Notch State Park.

Outside of tourism, Franconia was famous for its iron mines. The first iron works and mines began around 1801 and operated until the 1880s. Nearby Sugar Hill was also known for its iron. There were two iron works in Franconia. The only surviving stone furnace can be seen on Main Street near the Gale River today on private property, but you can see it from nature trails across the river. That stone furnace was owned by New Hampshire Iron Factory Company and became known locally as the “Lower Works.” The Haverhill and Franconia Iron Works was known as the “upper Works.” 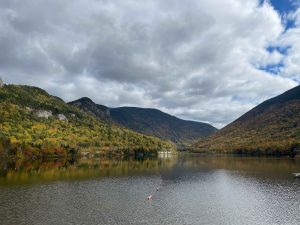 The birth of state parks in New Hampshire occurred around 1881 with the first state park, Miller State Park, established in 1891. Franconia Notch State Park became an official New Hampshire State Park in 1928. The Flume Gorge is one of the most popular attractions in the park today and was discovered in 1808 by 93-year-old Aunt Jess Guernsey accidentally. During her initial discovery, the was a giant egg-shared boulder suspended between the two walls of the gorge, but a heavy rainstorm washed the boulder away in 1883. That boulder has never been found anywhere. 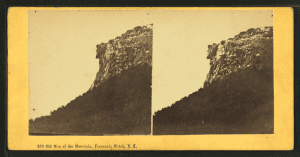 The Old Man of the Mountain is one of New Hampshire’s most iconic figures being widely featured on the state’s Statehood Quarter, state signs, license plates, and more. The famous natural attraction was a popular tourist attraction for over 200 years before falling down in 2003. Two land surveyors from Franconia, Luke Brooks and Francis Whitcomb, discovered the Old Man of the Mountain in 1805. The legend says the Luke Brooks woke up early one morning and saw the reflection of the granite face in Profile Lake. No one had ever seen it before due to the dense forest in the area.

The Dawn of the Ski Era

The White Mountains is home to some of the best skiing in the East, and Cannon Mountain is one of the oldest ski areas in New England. The Peckett family in Sugar Hill was trying to develop their small inn into a winter destination resort with a ski school and trails. The Pecketts saw the big potential in Cannon Mountain and worked on developing it as a ski mountain. The Richard Taft Trail became the first established trail in February 1933. In 1938, the construction of North America’s first passenger tramway began after Alexander Bright, a member of the 1933 US Olympic Ski Team, had seen passenger tramways in Europe and saw their potential in the White Mountains. 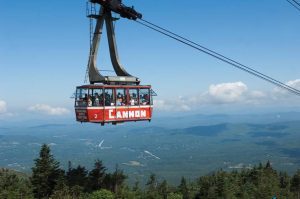 Building the tramway was no small feat, but it finally opened on June 28, 1938, after nine months of construction. In its first year, the tramway carried 163,000 passengers to the summit of Cannon Mountain. With the help of the tramway, Cannon Mountain quickly grew over the decades to become a popular ski resort. Significant investments were made in the 1950s to add more trails and lift projects with the help of state funding. Snowmaking came in the late 1960s. Today, Cannon Mountain is New Hampshire’s highest ski mountain and the birthplace of Olympic gold medalist, Bode Miller! 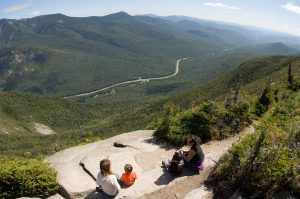 Franconia Notch is home to millions of years of geological and human history that has shaped the region as we know it today. 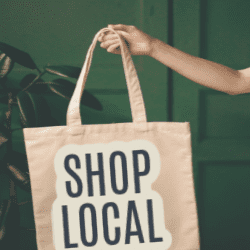 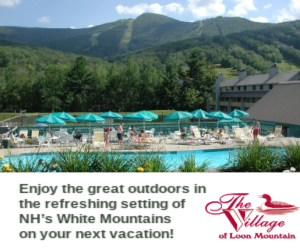 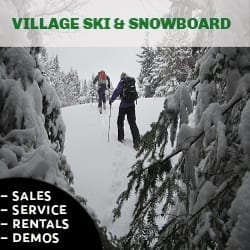 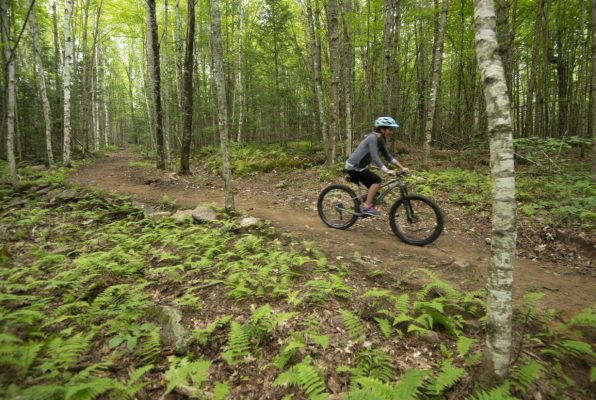 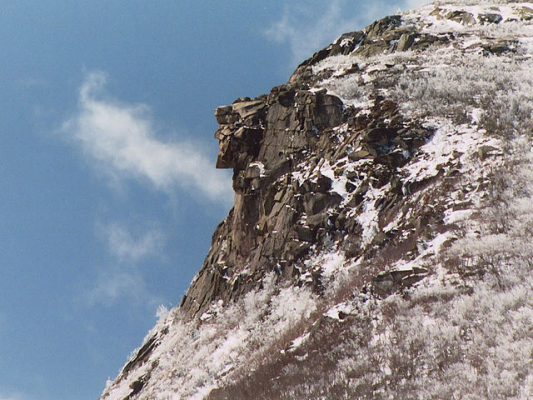